This healthy Christmas pudding recipe is lighter than a traditional Christmas pudding. It still has the heavenly flavour of spices and dried fruit, but it's low in added sugar, low in saturated fat and gluten free. It's also a bit easier to enjoy and digest after a big Christmas feast!

A traditional Christmas pudding contains a high amount of fat, usually in the form of suet, and a lot of added sugar. The label on a supermarket Christmas pudding puts it in the red category for sugar, and amber for saturated fat, and that's before you add any accompaniments. This no added sugar Christmas pudding recipe contains a very small amount of butter, and healthy oil from ground almonds. It is sweetened with a couple of tablespoons of honey, and the natural sweetness that comes from fruit, spices and sweet potato. The result is a light Christmas pudding with a delicious Christmassy flavour but lighter texture.

Ingredients for a healthy Christmas pudding

Preparing the bowl for a steamed pudding

I like to put a small circle of buttered greaseproof paper in the base of the greased heatproof pudding dish to ensure that the Christmas pud can be easily turned out.

This recipe will fill a one pint (570ml) pudding basin.

How to make the pudding mixture

Making the mixture for this no added sugar Christmas pudding is really easy, and it'll be ready to cook in less than 20 minutes.

How to cover a Christmas pudding

A steamed pudding needs to be well covered to ensure that the steam doesn't spoil the pudding. Place a double layer of foil over the top of the bowl, and tie firmly with string. It's best to put a small pleat in the foil to allow space for the pudding to rise a little.

How to steam your pudding in the slow cooker

The traditional way to cook a Christmas pudding is to steam it, and that works well for this recipe. I always steam puddings in the slow cooker, as there's no danger of it boiling dry. Simply place your oven proof bowl directly in the slow cooker pot, add 5cm hot water around the edge of the bowl, or until the water comes halfway up the bowl. Cook on low for 2 hours.

If you don't have a slow cooker, you can steam your pudding on the hob. Place the bowl in a large lidded pan on an upturned heatproof saucer, pour in 5 cm boiling water, and place over a low heat. Simmer very gently for 2 hours. Keep an eye on the pan to make sure that the water doesn't boil dry - keep it at the same level by topping up with boiling water from the kettle if necessary.

How to reheat healthy Christmas pudding

The best way to reheat your pudding is to steam it again. 1.5 hours either in the slow cooker or on the hob should ensure that a whole pudding this size is heated through.

Serve with Easy homemade custard - it takes just a few minutes to make, and is the perfect complement to Christmas pudding.

If you do end up with any leftover pudding, it's particularly delicious as a filling for baked apples. Core the apple, place small spoonfuls of pudding in the hole, and bake for 30-45 minutes.

Unlike a traditional Christmas pudding, I wouldn't recommend storing this healthy recipe for more than a few days due to its moisture content. However, it does freeze well, so if you want to get ahead, wrap the pudding carefully and freeze for up to 3 months. 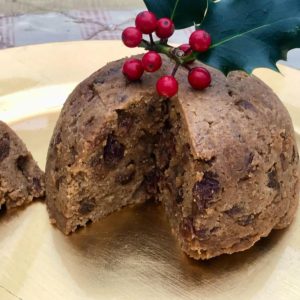 Please note nutritional information is for guidance only