This easy fish chowder recipe is the simplest all-in-one fish soup ever. You can use frozen fish, so it is pretty much a store cupboard recipe. You can cook it from scratch in 30 minutes. And it reheats well, which makes it a very convenient, easy midweek dinner. It's also a one pot dinner, which cuts down on the washing up. And of course it tastes delicious!

What is a chowder?

A chowder is a just another name for a chunky creamy soup. Chowders are often based around fish or seafood, although corn chowder is usually vegetarian. This chowder recipe is a chunky fish soup with vegetables and potatoes, and it's a complete meal. (Although you may want to add some crusty bread!)

This easy chowder recipe is one of the easiest ways to include more fish in your diet.

Why is fish good for you?

White fish is very good for your health. It is naturally low in fat and high in protein. It's also rich in a number of B vitamins, and minerals. White fish is a particularly good source of a mineral called selenium, which helps to protect your brain and boost your immunity. In the UK this is particularly important, as the levels of selenium in the soil are relatively low, so UK grown food can be low in selenium. (Read more about the health benefits of selenium here)

White fish does contain a small amount of omega 3 fatty acids, but at a lower level than oily fish such as salmon and mackerel.

I've used half frozen white fish and half frozen salmon fillets in this recipe. Of course, you could use fresh fish too. Any plain white fish is good: cod, pollack, haddock, basa. Avoid using fish such as plaice though as they will fall apart too quickly. You could also use smoked haddock. (If you use smoked haddock, cut down on the salt in the recipe.) I don't defrost the fish before using it in this recipe, although if your fillets are thick they may be difficult to cut when frozen. Take care with your knife!

You could also use a bag of frozen fish pie mix for this recipe. And if you like, add a handful of frozen prawns.

Add lots of vegetables for a healthy fish chowder

It's good to add a selection of vegetables to your fish chowder. Here, I have used sweet potato, leek, and frozen sweetcorn. But broccoli, red pepper, celery, frozen peas and carrot also make a great addition. They'll add lots of colour and nutrition. If you don't have leeks, you may want to add an onion instead. And of course you could use white potatoes rather than sweet potatoes. Easy fish chowder contains two portions of veg per serving, so it's great to help you on your way to your 5-a-day.

I use whole milk to make this chowder. You could also add a splash of cream at the end if you like, especially if you only have skimmed milk on hand. Either way, I start by adding water to cook the veggies, and add the milk later so that it doesn't boil over. A couple of teaspoons of cornflour thickens the liquid slightly.

You can also use fish stock instead of water for a stronger flavour. But make sure to adjust the seasoning so that your soup doesn't end up too salty.

This fish chowder recipe is very simple to make, and everything is cooked in one pan.

Start by frying the vegetables. This adds more depth of flavour to the dish, and helps to soften the veg. You then add water (or stock if you prefer) to the pan, and simmer the veg until they are partway cooked.

If you are using frozen peas, sweetcorn etc, add these after the fish, as they'll take less time to cook.

It's important to stir the cornflour into the cold milk before adding it to the pan so that you get a smooth texture.

Add the cubed fish, seasoning and milk mixture, and bring back to a simmer until the fish is cooked through. Serve immediately, or reheat later.

Full instructions are included in the recipe card beneath.

Can I reheat fish chowder?

Yes, this recipe is perfect for meal prep. The chowder will keep well in the fridge for a couple of days, then you can reheat it through on the stove top. I often find it's even nicer when reheated as the flavours develop more.

Can I freeze fish chowder?

Yes, this recipe will freeze well in an airtight container. However, if you've used white potatoes, you might find that they lose their texture.

If you are looking for easy ways to add fish to your diet, you might also like quick and healthy mackerel pate, or this super quick and easy healthy fish pie. And this recipe for healthy fish and chips is another great way of cooking frozen fish. 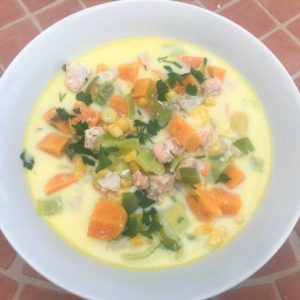